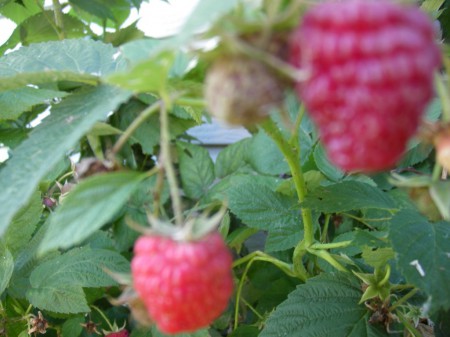 THANKSGIVING BLESSINGS!
Seeing we had our Thanksgiving dinner with our children last weekend, we made moment by moment plans on what to do this past weekend. I cooked a ham instead of turkey and made a pumpkin dessert instead of pie. At the last minute we invited guests on Saturday & Sunday for supper.

CUTTING DOWN THE RASPBERRY PATCH IN MINUTES
The weather was sunny and warm on Saturday so Melvin decided to do a few jobs for me. I mentioned weeks ago that I wanted to take out the raspberry patch that was at the north end of the garden. After 6 years it had grown to be at least 5 feet wide so the plants on the inside were not producing too well anymore and it took a long time to pick them. He hooked the mower up to the tractor and with two swipes the whole patch was gone in minutes with all of the plants chopped up fine.

START NEW RASPBERRY PLANTS
Last year I started a few small patches around the house that are producing very well, so we will still have enough berries next year. In a few years I will again plant another row in the garden.

Moments later Melvin had hooked up the cultivator and he was tilling the garden. I had to run ahead and quickly dig out the Spanish onions that I wanted to move.

In no time at all the vegetable garden & raspberry patch were worked. An unexpected blessing for me!

SPANISH ONIONS & APPLE TREES
Five years ago I planted two batches of Spanish onions under the crabapple tree. Since then I have never had bugs tunnel into the apples. I always wanted to put another two plants under the other tree, even though the trees are quite close and there has been no evidence of bugs in the apples of that tree either. I divided the Spanish onion plant into 2, dug 2 holes and planted them, under the other apple tree. Double protection!

WHY TILL THE GARDEN TWICE?
Yes! As soon as it freezes at night I will till the garden deeply one more time with my smaller garden tiller for three reasons:

1. SLUGS
Two years ago we had a wet summer and I had quite a few slugs in the tomatoes and beets. That fall I put out pieces of metal, large stones and pails, lifting them every morning and sprinkling salt on the slugs that had gathered.
This year I found one slug and I killed him on the spot. But they say that a second tilling can bring up any slugs that have gone down to hibernate and then at night if it freezes, they will die. It’s not hard to take these extra measures to keep the garden free of these pests.

2. POTATO BUGS
The same idea is great for the potato bugs. That second tilling will also bring them to the surface and the frost at night will kill them.

3. PREPARE THE GARDEN FOR SPRING PLANTING
One more reason for tilling the second time is because the first time it was done quite rough with the cultivator. The second time I will use my tiller which leaves the garden nice a smooth; ready for spring planting.

So, we had a great weekend – we shared a few meals with some family and friends, we accomplished a few fall garden tasks, we took time to worship on Sunday and as well we relaxed and enjoyed the warm weather. We are very blessed & thankful!