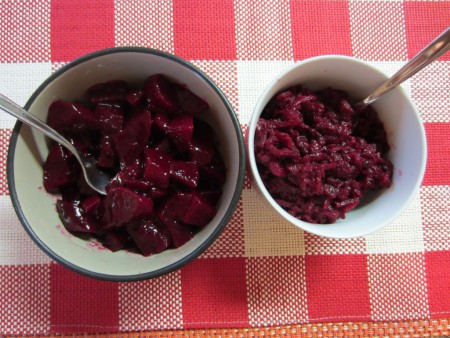 OCTOBER 11, 2018 BEETS
It looks like we missed fall this year. Just a few weeks ago it was sunny & nice and warm. We just finished harvesting our grains fields.

Then one day later it was windy, cold with periods of rain & even some snow.

The garden was all out except for the beets so rather than wait any longer I put on my gloves, pulled them out, banged off the mud, filled the wheel barrel & drove it into the car garage.

I was eager to try a new recipe from someone. In a short time I had 2 quarts of pickled beets cooling on the counter. We did our usual taste test and since then I have made several more batches, changing ingredients because of our health and preferred taste.

This week I will make enough jars to give a jar to each or our family. I will include a 4 by 5 inch card with the following information on:

REFRIGERATER BEET PICKLES
(store in the fridge)
I am sure you have read the health benefits of eating beets and as well Apple Cider Vinegar & ginger.
I have exchanged the sugar for this sugar substitute but instead you can use honey or a few spoons of stevia.
These pickles can be stored in the fridge to eat with a meal or you can add a spoon full or two of the juice to a salad dressing that calls for vinegar or to a bowl of vegetable soup.

Wash 4 pounds of raw unpeeled beets. Put 1 cup of water & the steam rack into your insta-pot. Arrange the beets so they are somewhat tight, more towards the bottom than the top.
Plug in the pot, close the vent, turn the lid to lock. Press steam & set the timer for 17 minutes.
When done, allow the pot to cool until the button drops & the pressure is released.

Lift the steam rack & beets out, saving the liquid. Rub the peels off and cut the beets into
1/2 – 1 inch cubes. Divide and press the beets into 2 quarts or 3 smaller sealers.
Make a brine of the following:
1 cup beet liquid
1 cup Apple Cider Vinegar
1/3 cup Xylitol (or maple syrup or honey) Or use a few teaspoons of stevia to taste.
3 (1/4 inch thick) coins of ginger (or one for each jar)
1 cinnamon sticks broken into the number of jars you are filling
1 teaspoon whole cloves
1 teaspoon Himalayan salt
1/2 teaspoon mustard
1 tablespoon corn starch (stir to dissolve in)
Bring the brine to a boil; pour over the cut beets in jars. Store in the fridge. They are ready to enjoy in 24 hours.
CANNING THESE PICKLES
It is now the last week in October. I have given away jars of these pickles and decided I wanted to can some pints to store in the cellar for a longer period of time. I followed the above recipe 3 times, sterilized 14 pint jars and filled them with the beets and brine. Once the tops were on I put them into the oven in 1 ½ inches of water at 275 degrees for 45 minutes.
The tops all sealed so these will keep for a year or more.

FROZEN COOKED BEETS
Last year I froze cooked & finely shredded beets in 1 cup plastic bags. Yesterday I took out a number of these bags, thawed them and drained them for several hours.

BEET JUICE
I added ½ cup of this beet juice to 1 cup unsweetened apple juice, 1 cup of current juice and 1 cup of chokecherry juice. I added 10 drops of stevia as the juices were quite sour.

REPLACING MILK AT BREAKFAST
The above is what I use on my porridge each morning instead of milk. I mix together any variety of the frozen juices that I picked in the summer.

BEET FIBRE
After eating a jar of pickles, I saved the brine in the fridge as I knew it was apple cider vinegar, healthy and too good to throw out. I added the fibre that was left in the strainer (as above) to a jar of this remaining pickle juice & put it back in the fridge.

Today we had company for lunch & everyone enjoyed this pickle relish. So if your beets are all out of the garden & in the freezer either shredded or cubed, you can make these pickles too.