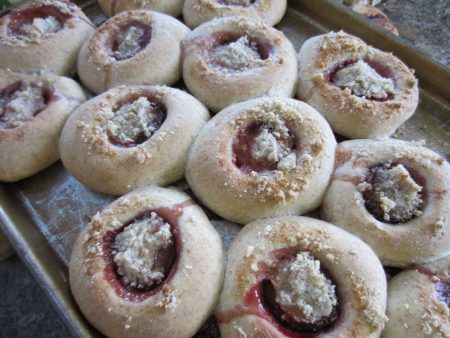 December 14, 2020
I usually have much of the Christmas baking done by now, but this year with the pandemic, we won’t be having any company, not even our family so I will do very little food preparing. At the end of October I made a few loaves of Mom’s Christmas cake recipe. I will share this with a few others in the family who like it too. I share the recipe in my “From Your House To Ours” cookbook.

This morning I decided to make Plum Kuchen. Here again we don’t need much so I put half of the dough into cinnamon buns. I used the cinnamon bun recipe on page 50 of my “Eat More Whole Grains” cookbook. I made a few changes to make the recipe a bit healthier by exchanging 1 1/2 cups of the water for plain yogurt, I used monk sugar instead of regular sugar and substituted over half of the flour for spelt flour.

YEAST DOUGH RECIPE
1 1/2 cups yogurt
2 cups water
1 cup oil
4 eggs
1/2 cup monk sugar (or whatever kind you want)
1/2 teaspoon salt
6 cups spelt flour
3 tablespoons fast rising yeast
Beat the first 7 ingredients. As it mixes sprinkle over the yeast. Knead in enough unbleached flour to make a nice soft dough.
Knead 8 minutes in your Bosch or by hand. If using a Bosch the gluten will now be developed and you can proceed further. If kneading by hand, let the dough rise double once, then punch down and then proceed further to make cinnamon buns and or plum kuchen.

CINNAMON BUNS – 2 dozen buns
3/4 cup apple sauce
cinnamon
1/2 cup brown sugar
Put half the dough on to a floured counter. Press the dough about 1/4 inch thick into a rectangle. Spread with the apple sauce, then sprinkle with brown sugar and sprinkle with cinnamon. Roll up and pinch the edge. With a piece of dental floss, cut the roll into 3/4 inch thicknesses. Place these on a well buttered cookie sheet, allowing room for them to rise.
Let rise double and then bake at 350°F 15-20 minutes or until golden brown.

PLUM KUCHEN – 2 dozen buns
Roll the remaining dough out on a floured board 1/4 inch thick. Using a large glass cut out circles, placing them on to a greased cookie sheet, again allowing room for them to rise. Press a half plum into the centre, peel side down.. Sprinkle with a little sugar and press a spoon of crumbs on top of the plum.
Allow to rise double and bake at 350°F for 15 – 20 minutes or until golden brown.
Remove from pans, allow to cool and freeze or enjoy!
Crumbs;
2 cups unbleached flour
1/2 cup sugar
1/2 cup butter
2 tablespoons milk or water
Put flour and sugar into a bowl. With beaters, crumble in the butter. As it mixes, add the milk and just beat until it is mixed in. Press some on to each plum. Winnie