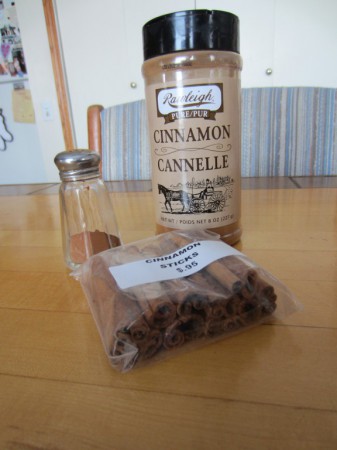 CINNAMON AND OUR HEALTH
I have used cinnamon in buns, cookies and apple pie as long as I can remember. We love the taste and have never thought beyond that. If I could get cinnamon in bulk cheaper, I went for it. But now I have come to realize that there is fake cinnamon that is not nearly the same as the real stuff. I no longer look for the cheapest anymore, but rather for the best.

A few years ago I learned that real cinnamon is made from the bark of a certain type of evergreen tree. It is said to contain more antioxidants than any other spice. This real cinnamon is been shown to lower bad cholesterol and lower blood pressure. Just lately a new study has suggested that it can help combat Parkinson’s, disease. They are still doing clinical trials, but if cinnamon is a healthy spice, and if someone has Parkinson’s disease, it is certainly a great spice worth adding to one’s menu.

CINNAMON IN BAKING
When a recipe calls for a teaspoon of cinnamon, I always use at least a tablespoon or more. It tastes great in muffins or loaves and when making cinnamon buns, I am very generous.
Oatmeal cookies taste wonderful with some added cinnamon as well.

CINNAMON ON TOAST & PORRIDGE
I put cinnamon into a salt shaker and put it on the table at breakfast. My favorite topping for toast is 2 heaping tablespoons of pure apple sauce that I made & froze from our apple trees. (No sugar was needed) with about a half teaspoon cinnamon sprinkled generously on top. Yummy!
But it is also great on any other jam as well.
Yes, and even on porridge; cinnamon just gives it an added perk.
There are times when my blood pressure is a bit high, so I do try to get ½ teaspoon once a day.

STORING SPICES
Freshness counts and is always better. When in doubt, use your nose. If the spice or dried herb no longer has a scent, it may be time to replace it.
Store in a cooler dark place where it will be dry.
Time for me to bake some cinnamon buns. Just writing about cinnamon makes me realize we haven’t had fresh cinnamon buns in quite some time.
It is cold and storming outside so what better way could there be than baking to warm the house. Winnie